Lockdown ’21 and a new fridge

Previous Next
Lockdown ’21 and a new fridge 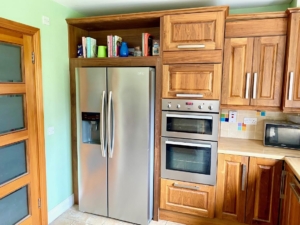 I was happy to see the back of 2020. I think we were all looking forward to the New Year with a bit of hope and cheer. Sure enough, there was another Covid peak after Christmas and we are back into another in early January. All is fine for a while not having regular work, however, Groundhog Day soon set in. There are a few household jobs that need doing but any big jobs left are all outside in the garden ( if only the weather was a bit better ). Then, as if on queue, our built in fridge goes on the blink. Not a big job in itself to replace, however, it was now time for a large American fridge to make a much discussed appearance. We had the space, we just needed to be more precise with our existing cupboard layout.

Out came the old fridge and a pull out larder from the old design. It was always pot luck trying to find anything in that larder, vertical storage just doesn’t work behind the shadow of a door. However, the wire baskets were retained for future use. Careful measurements were made and a new housing was made for the replacement fridge. All the existing wood panels were #upcycled and #reused for the project, with very little waste. Some kitchen doors were now redundant and were broken up for kindling. Let’s hope we get some decent weather this summer, with a chance of a long BBQ and an evening around the fire pit.

The knock on effect of losing the larder was a strategic cull of any unnecessary items in the kitchen and a better use of all available space. Cupboards were slimline and shelves were readjusted for bigger items. Drawers were emptied and #DIY dividers were built to maximise visibility, stop clutter and over-stacking. Cooking ingredients were always hard to find, so, a new #spicedrawer was invented. The larder wire racks did come in handy in the end. New #DIY double shelving was added to some cupboards to gain maximum space available.

When I looked at our current set up, the result was so much better. However, a short discussion revealed our regular, ongoing lack of fridge space for BBQ’s and Christmas time. So, the utility room also got an overhaul, again, looking to maximise the existing space available. The washing machine was moved and a new housing was built using only half of the current worktop. There was enough head space for the existing tumble drier to be stacked on top. This opened up a floor space of almost 800mm to the left, perfect for a ………… another fridge !!

What started out as a simple enough problem ( the fridge is broken ) ended up being a much larger job but a labour of love. I was grateful for the current lockdown this time around, allowing me the chance to take on the project. It ended up being much bigger than expected but well worth the effort. So, be careful what you wish for ……… and get it ! Next stop…the garden !